I have a bottle of the fluid which is unused. Toss me a couple-o-bucks for shipping and it's yours. Recoton, which owned the brand, went bankrupt in April and sold its accessories business to Gemini Industries. Discwasher doesn't appear anywhere on Gemini's website. I suspect the market for inexpensive record cleaners is even smaller than the market for inexpensive turntables many of which are bought by people who don't bother to clean their records.

So I wouldn't be surprised if they just discontinued it. If you've got the brush, just use distilled water. Works about as well, frankly. I still use the brush but ditched the fluid after I discovered globs of stuff growing inside. The growth occurs in both the small red bottles and the large red refills. Stuff growing inside? The label on D4 says it contains isopropyl, and I wonder what else so I wonder what could grow in that?

I will pour it out into a beaker and inspect it. Otherwise, I guess I better contact these other guys to see what they have for sale. Probably enough for me to use to transfer plenty of discs, as I don't use the TT much for just listening. The whole system has been collecting dust and not used alot lately Bottles that have never been opened except for their initial filling should still be fine. I'm basing this on my own experience with this product. Storing the product in different environments may introduce variables that i myself never ran into.

Pour it into the D4 bottle. There is nothing sacred about D4. Hammy is right; Discwasher cleaning fluid is not sacred.


What about obtaining a replacement Discwasher brush? Are they worth replacing or should I just go with a different system?

That's not you, right?

I am currently using a Decca carbon brush, Gruvglide and a very old Discwasher system. Some records refuse to play cleanly. Any thoughts and insights would be appreciated. Hammergjh, I do think that Discwasher brushes have to be replaced after they have seen a lot of use even if they visually still look good. The brush removes particulate and greasy soils from the record.

The particulates can be removed from the brush with another brush but the grease and detergent residue remains. Over time, the concentration of grease and detergent residue will build-up on the brush and result in excessive redeposition back onto the record. It may be possible to just periodically rinse the brush with distilled water to help lift the detergent and grease residue off the brush. The problem is you can never be certain how clean the brush is after it has cleaned a lot of records. Note: I've never searched various audio forums to see if this issue has been adequately addressed.

The answer may be buried in one of the audio forum websites. It's made for www. Any brush will need to be replaced after enough uses, as Mr. Kidknow said. I like the Disc Doctor brushes, which come with replaceable pads. The handles will last forever. As Hammy suggested, brushing and wet cleaning without vacuuming is largely a waste of time. If you don't quickly vacuum off the scummy solution before the liquid evaporates, all the junk goes right back where it started; but now it's been broken down into smaller particles and pasted deeper into the grooves.

Until I can get more D4 record-cleaning fluid for use with my DiscWasher, I am using a liquid that RadioShack sells for use with their record-cleaning system. Why would this company stop making this product? I know there is a vast amount of people out there who depend on the stuff to keep their irreplaceable record collection perfect.

I probably buy of the little bottles a year having failed to find the bigger bottle a long time ago. Retailers have been trying to steer me to other products saying their stuff is better. Other products I have reviewed seem to be for people who are trying to clean filthy discs. All my records are pristeen. Rational or not, I want D4! Maybe he'll give up the secret formula and you can mix up your own. See my post from for the Discwasher formula. That formula would be here at this clickable link for Discwasher formula.

I still use my Discwasher, but only to run over the record before i put it through the Nitty Gritty. As far as pops go, if its not a scratch, you can sometimes get them out by using a baby hair brush which will loosen whatever is embedded in the groove. Posted 10 Jan edited. Nah, Bill, I already looked into a cleaner. Far too much money for the useage I'm gonna give it. I think I'll just stick to the Discwasher. I may look into a used Zerostat though. Any of you guys got one you want to sell or trade your old one for some CDs from my trade pile?

Does not use any liquid. It was popular for a bit in the 90's and I have hardly used it. If you are interested let me know. You're always going to hear arguments against using alcohol of any sort. And rightfully so, I think. 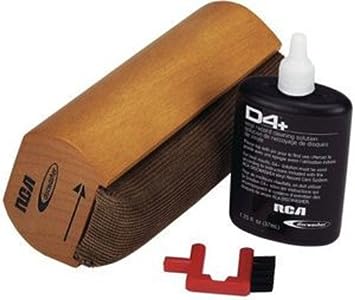 I used more than a "just few drops" of ISO, however. I'll make this at work tommorow-although I think all you really need is ethylene glycol and water. Sodium azide in high concentrations can be rather nasty though, producing a toxic gas.


I think it's used in airbags in cars. BTW, I should have searched this archive first Though I know a wee bit of toxic stuff sometimes doesn't kill ya. Dig up that British issue of Science from '52 or earlier before you play Mr. LC has taken their LP cleaning solution off-line for revision but I seem to remember it containing Triton XLN which, to the best of my knowledge, is at least somewhat toxic.

So any of you who use the old LC solution might want consider either changing to something else for the time being or I dunno Posted 11 Jan Jeez, with all this talk of nasty chemicals, maybe I should look into a less toxic cleaning solution. I have to say, I never thought that D4 fluid smelled all that bad.

In fact, it doesn't smell at all. Nothing to worry about-although ethylene glycol is antifreeze A couple of years ago, I dug out my big bottle of D4 from over 20 years ago, a little less than half full. I looked inside and there was quite of bit of black sediment in the bottle. I don't know what it is, but you might want to take a peek in your bottles if you haven't already.

Ew, thanks for the tip. One bottle is clear as can be, the other looks like there are small flakes of tea leaves in it.